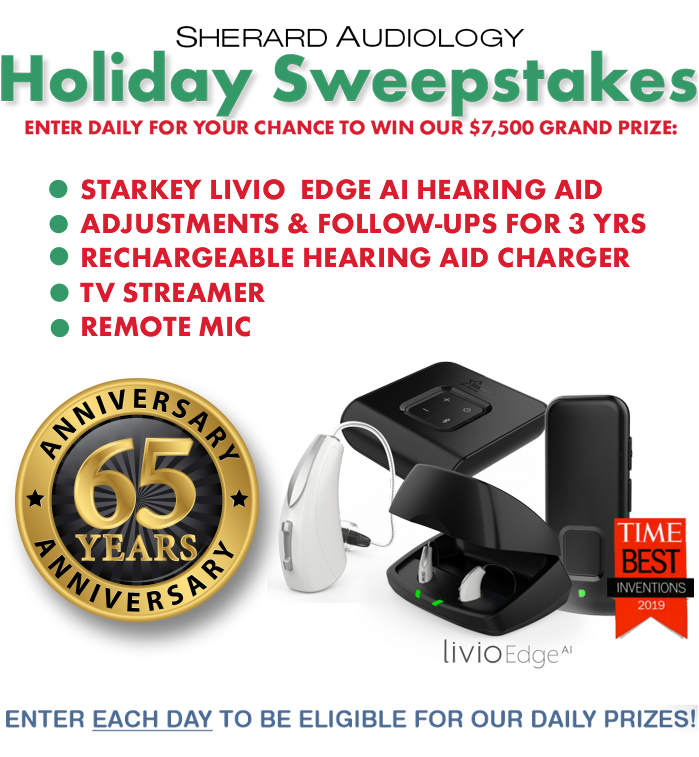 Indicate whether you have entered our sweepstakes before and then fill out the appropriate form:

PARTICIPATION SUBJECT TO COMPLETE OFFICIAL RULES. PROMOTION SHALL BE CONSTRUED AND EVALUATED ACCORDING TO THE LAWS OF THE STATE OF NEBRASKA. VOID WHERE PROHIBITED.

2. ELIGIBILITY: The Promotion is open only to individuals who are legal residents of the United States, residing in Nebraska, who are 18 years or older at the time of entry. Potential winner may be required to provide proof of legal residency if requested by Sponsor to determine eligibility and as a condition of prize award. Employees of Sherard Audiology (“Sponsor”) and affiliated companies, distributors, Web design, advertising, fulfillment, and promotion agencies involved in the administration, development, fulfillment and execution of this Promotion (collectively “Sponsor and Promotion Parties”), and the immediate family members (spouse, parent, child, sibling, grandparent, and/or “step” of each) and those living in the same households as such employees are not eligible to participate. Void outside the states listed above and where prohibited or restricted by law, rule or regulation.

3. HOW TO ENTER: Eligible individuals (“Entrant”) can enter the Promotion by visiting Sherard Audiology (“Website”) either manually, or by scanning a QR code on specially-marked POS found at Sherard Audiology, Scottsbluff NE, and filling out the online sweepstakes entry form. A complete entry form will include an Entrant’s name, email address, mailing address (No P.O. Boxes), and birthdate. Limit one entry per day per Entrant. No account creation or additional registration is required. No purchase necessary.

4. PRIZES:
GRAND PRIZE: Winner will be selected at random from the aggregate pool of eligible entries on or about January 5, 2021. The following prizes will be awarded as grand prize:

DAILY PRIZES:  Winners will be selected at random from the aggregate pool of eligible entries each day beginning November 2, 2020 thru December 31, 2020.  An entrant who has won a daily prize is eligible again for a daily prize drawing after a period of 14 days. The following prizes will be awarded daily as outlined:

This promotion is not affiliated with the Starkey OR Grizzly. LivioEdge AI® is a Registered Trademark of Starkey, Inc.

5. PRIZE WINNER NOTIFICATION: Potential prize winners may be notified by mail and/or e-mail (at Sponsor’s sole discretion) at the postal address/e-mail address provided at the time of entry on the Website. Potential prize winners may be required to sign and return an Affidavit of Eligibility and Liability Release (“Affidavit”) with a publicity release (where lawful) within ten (10) days of the initial attempted prize winner notification (as indicated by the date referenced in the Affidavit). If (i) any of the required documents are not returned by the designated due date; (ii) the mail is returned as undeliverable without a forwarding address; or (iii) an e-mail notification is not responded to within 24 hours; then prize may be forfeited and an alternate winner may be selected at Sponsor’s discretion. Upon forfeiture for any reason, no compensation will be given. Prize winner may pick up their prize(s) at Sherard Audiology and Tinnitus, 2821 Ave B, Scottsbluff, NE 69361. If prize(s) are not picked up within 60 days, prize winner can choose to have their prize(s) sent to their postal address provided during registration on the Website. Sponsors are not responsible for mail returned as undeliverable. Allow 12 to 14 weeks for shipment of prizes by mail following notification process. Prizes will only be delivered to addresses within the United States.

6. GENERAL CONDITIONS ON PRIZES: This Promotion is subject to the laws of the state of Nebraska in the United States. No substitution of prize is offered, no transfer of prizes to a third party is permitted and prizes are not redeemable for cash value. Sponsors reserve the right to award a prize of equal or greater value in the event the published prize becomes unavailable. Any portion of any prize not accepted by the winner will be forfeited. Any difference between the stated approximate value of a prize and the actual value of prize will not be awarded. Prize recipients are responsible for all applicable federal, state, and local taxes, if any, on a prize. You are not a winner until your entry has been reviewed and verified in accordance with these Official Rules, and you have fully complied with these Official Rules.

7. CONDUCT: By entering this Promotion, Entrants agree to be bound by these Official Rules and the decisions of the Sponsor that shall be final and binding in all respects. The Official Rules will be posted at the Website throughout the Promotion Period. Failure to comply with these Official Rules may result in disqualification. Sponsor reserves the right at its sole discretion to disqualify any individual suspected of tampering with the entry process or the operation of the Promotion or the Website; or to be acting in any manner deemed by Sponsor to be in violation of the Official Rules; or to be acting in any manner deemed by Sponsor to be unsportsmanlike or disruptive, or with intent to annoy, abuse, threaten or harass any other person. CAUTION: ANY ATTEMPT BY A USER OR ENTRANT OR ANY OTHER INDIVIDUAL TO DELIBERATELY DAMAGE ANY WEBSITE PAGE OR UNDERMINE THE LEGITIMATE OPERATION OF THE PROMOTION IS A VIOLATION OF CRIMINAL AND CIVIL LAWS AND SHOULD SUCH AN ATTEMPT BE MADE, SPONSOR RESERVES THE RIGHT TO SEEK DAMAGES AND COSTS (INCLUDING WITHOUT LIMITATION, ATTORNEYS’ FEES) FROM ANY SUCH PERSON TO THE FULLEST EXTENT PERMITTED BY LAW.

8. LIMITATIONS OF LIABILITY: The Sponsor and Promotion Parties assume no responsibility or liability for (a) any incorrect or inaccurate entry information, or for any faulty or failed electronic data transmissions; (b) any unauthorized access to, or theft, destruction or alteration of entries at any point in the operation of this Promotion; (c) any technical malfunction, failure, error, omission, interruption, deletion, defect, delay in operation or communications line failure, regardless of cause, with regard to any equipment, systems, networks, lines, satellites, servers, camera, computers or providers utilized in any aspect of the operation of the Promotion; (d) inaccessibility or unavailability of any network or wireless service, the Internet or website or any combination thereof; (e) suspended or discontinued Internet, wireless or land line phone service; or (f) any injury or damage to participants or to any other person’s computer or mobile device which may be related to or resulting from any attempt to participate in the Promotion or download of any materials in the Promotion. If, for any reason, the Promotion is not capable of running as planned for reasons which may include without limitation, infection by computer virus, tampering, unauthorized intervention, fraud, technical failures, or any other causes which may corrupt or affect the administration, security, fairness, integrity or proper conduct of this Promotion, then Sponsor reserves the right at its sole discretion to cancel, terminate, modify or suspend the Promotion in whole or in part. In such event, Sponsor shall immediately suspend all drawings and prize awards, and Sponsor reserves the right to award any remaining prizes (up to the total set forth in these Official Rules) in a manner deemed fair and equitable by Sponsor, such as by way of example and not by way of limitation, in a random drawing from among all eligible, non-suspect entries received up to the time of the impairment, and Sponsor and Promotion Parties shall not have any further liability to any participant in connection with the Promotion. Sponsor may modify and amend these Official Rules as they may appear online from time to time during the Promotion for clarification purposes without materially affecting the terms and conditions of the Promotion. Sponsor makes no representations or warranties of any kind concerning the appearance, performance or safety of any prize awarded.

Grizzly Coolers, LLC and Starkey, Inc. are not sponsors of this promotional program.

Start Your Journey to Better Hearing